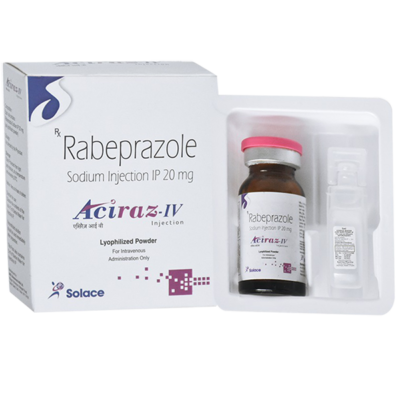 Rabeprazole is a proton pump inhibitor that decreases the amount of acid produced in the stomach. Rabeprazole is used short-term to treat symptoms of gastroesophageal reflux disease (GERD) in adults and children who are at least 1 year old.

proton pump inhibitors are inactive at neutral pH. But, as soon as pH drops below 5, the drug rearranges into two positively charged ions and binds with H+K+ATPase enzyme by forming a covalent bond and inactivates the enzyme. It also inhibits the mucosal carbonic anhydrase enzyme.

Its involves getting absorbed into the parietal cells of the stomach, which are the cells that are responsible for secreting hydrochloric acid (HCl). At this point, rabeprazole is inactive. However, rabeprazole is then secreted into the secretory canaliculus of the parietal cells, which is the space from which acid secretion occurs. Here, acid secretion is mediated by the energy-dependent acid pumps,called hydrogen potassium adenosine triphosphatase (H+/K+ ATPase) pumps. These enzymatic pumps have cysteine amino acid residues. After being activated by gastric (stomach) acid to a reactive sulfenamide intermediate, rabeprazole permanently binds the cysteine residues, forming covalent, disulfide bonds. This action fundamentally alters the configuration of the acid pump, thereby inhibiting its activity. Thus, acid can no longer be secreted into the gastric lumen (the empty space of the stomach), and the pH of the stomach increases.