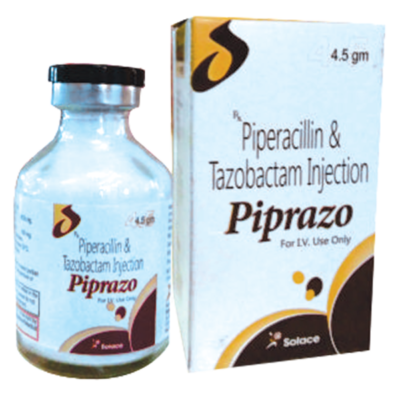 Tazobactam causes inhibition of many beta-lactamses and has limited activity against class I beta-lactamases other than class Ic types.

It is not absorbed orally, and should be given by I.V or I.M. The drug is not concentration dependent in its actions.

It is widely distributed in body fluids, and about 30% is protein bound. In body Piperacillin is metabolized as des-ethyl metabolite and Tazobactam as single metabolite.

The concentration half-life of Piperacillin and tazobactum are 0.7-1.2 hours respectively. Elimination of drug is through kidney by glomerular filteration and tubular secretion. They are excreted in unchanged form in urine as 68 – 80% respectively.

Piprazo is contraindicated in patients with a history of allergy reaction to any of the penicillins, cephalosporins, or beta-lactamase inhibitors.